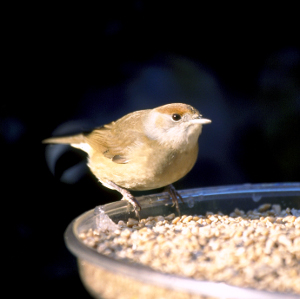 A stocky, grey-bodied warbler with a distinctive black cap. The female's plumage is browner and the cap is reddish-brown rather than the black of the male. It is a widespread summer visitor to Ireland from April to September.

Nesting: A neat cup-shaped structure at low level made from grass, roots, small twigs and moss, lined with fine grass and hair.

Eggs: One or two clutches of 4-6 buff-coloured eggs with brown marks in April-June.

Food: The Blackcap has a varied diet consisting mainly of insects but will also eat worms and snails, nectar and pollen. Fruit and berries are consumed in autumn and winter. Readily take sunflower hearts and peanut cakes.

Call: A melodic warble, the Blackcap's song starts with a jumble of harsh notes, followed by a series of rich, fluting tones which can include parts of other birds' song, such as Nightingale, Blackbird, and Song Thrush. Little wonder the song of the Blackcap is often considered the best of all bird songs.

Characteristics: Blackcaps like territories with a mix of shrubby undergrowth for nesting, and tall trees which provide feeding and the concealed perches they prefer as song-posts. In winter, they will venture into mature gardens to supplement their diet of fruit and berries with table scraps and peanuts from hanging feeders.

They are not very social birds and will more usually be seen individually rather than in groups.