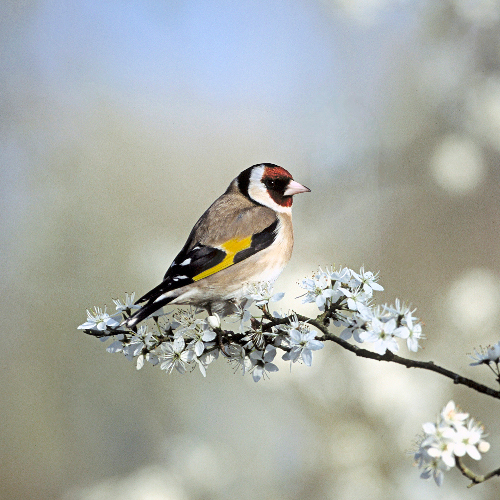 The European population of this bird, has been evaluated as secure.

Similar to a Blue Tit in size, they have a buffish coloured back with black and white wings that have a distinctive yellowy gold flash, which becomes more obvious in flight. The head has a red, black and white patterning although juveniles don't display this until after their first moult, about two months after fledging.

The combination of beautiful colouration and a readiness to visit feeders makes the Goldfinch an enduring favourite with garden birdwatchers. Males and females are almost identical, but if you get good views the red above the eye extends behind the eye in males, and the black on the head and wings is usually more pronounced, without brown or buff edges to the feathers. Both birds make the delightful, tinkling call, but the males are the principal singers.

Despite popular misconceptions, the seed of choice for the Goldfinch is not Nyjer (Thistle) Seed as many believe, but Sunflower Hearts – a food we are proud to have introduced to the UK bird feeding marketing almost 20 years ago. Nyjer provides an excellent alternative to if the Goldfinche are moved off the Sunflower Hearts by other birds. Sunflower hearts are the tasty centre inside the black sunflower seed. They are one of our best-selling foods and give garden birds maximum energy. We have recorded a staggering number of birds feasting on sunflower hearts. Even 'non seed-eating' birds such as thrushes, Robins and Blackbirds who generally have difficulty in opening the outer husks, have been seen merrily feeding away.

Nesting: From April to August. Small cup shaped nest made of wool, moss and grass, usually found at the end of thin outer branches nest lined with moss, grass and feathers.

Food: Natural food is insects and seeds such as dandelions, thistles and lavender. From the feeder they will eat nyjer, sunflower hearts, black sunflower seeds and peanuts.

Call: The call is often heard before you see them. It is typically said that it has a liquid quality and is a tinkling 'tsswitt-witt-witt'.

Characteristics: Appropriately known collectively as a charm, they have an airy, bouncy flight and flit around on open waste ground in flocks of 6-12 in search of weed seeds. One of the most common images of a Goldfinch is of them hanging upside down (like a member of the Tit family) on a teasel head, demonstrating their agility. Planting teasels and leaving a 'wild' area within your garden is one of the best methods of attracting Goldfinch and if you're not an avid gardener, they are a great excuse for having a dandelion lawn!

They are present throughout the year and are sociable birds who travel around in small flocks that defend food supplies from other species. The only time that there may be any conflict within a flock is during the breeding season when food supplies are more valuable.