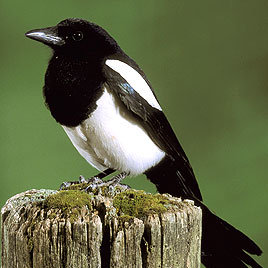 The European population, of this bird, is regarded as secure.

With its distinct black and white plumage the Magpie is a totally unmistakable visitor to many gardens. The black feathers on the body are iridescent with green, blue and purple hues, while the belly and outer wings are white. Sexes are similar in appearance.

Habitat: Magpies can be found in a wide variety of habitats - woodland, farmland, moorland, parks and gardens - though they prefer grassland with thick hedges or scattered trees. They have adapted well to urban and suburban environments and can be seen in many city centres.

Nesting: A substantial domed structure constructed of twigs and sticks and lined with mud and plant material. Usually located in a tree or tall shrub.

Eggs: One clutch of 3-9 speckled greenish eggs in March-April.

Call: Calls include a harsh kyack and a repeated shak-shak-shak.