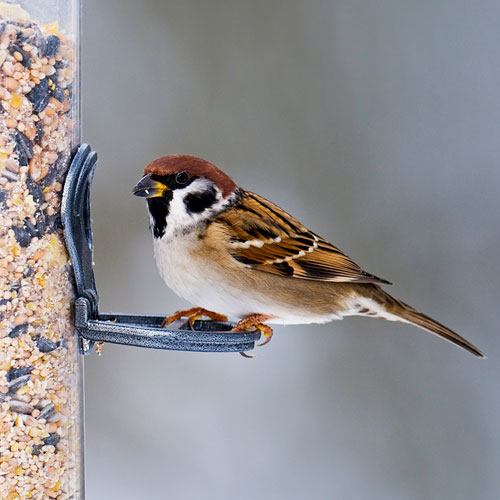 The European population, of this bird, is regarded as “Of concern” by BirdLife International.

They are similar in appearance to House Sparrows, but a closer look will show that the birds are very uniform as both sexes have the same plumage (House Sparrows have separate male and female plumages). Tree Sparrows have a chestnut crown and, the key field mark, dark cheek patches on white cheek patches, which creates the impression that they are wearing headphones.

Nesting: Usually in a nest box (28mm entrance or larger) or a natural cavity. An untidy grassy construction with a dense lining of feathers. May also nest in dense cover in suitable habitat.

Eggs: 5-6 dark brown, heavily speckled. Usually two, sometimes three broods each year. Very sensitive to disturbance at the nest and may abandon even when the chicks are close to fledging.

Food: A mix of seeds, buds and berries with some invertebrates.

Call: Similar chirps to the more familiar House Sparrow, but with a more nasal or electronic sound.

Characteristics: Tree Sparrows are usually found close to damp hedges or open woodland in arable landscapes, and are absent from large areas of south west England, west Scotland, all of Wales and most of Ireland apart from a narrow strip along the north and east coast.

Colonies will often grow over several years before suddenly collapsing. The species invests very little effort in post-fledging care, seeming to rely on an abundant supply of insects close to the nest for the newly independent youngsters to feed on, and some studies suggest that high juvenile mortality may be a factor in the species’ decline.