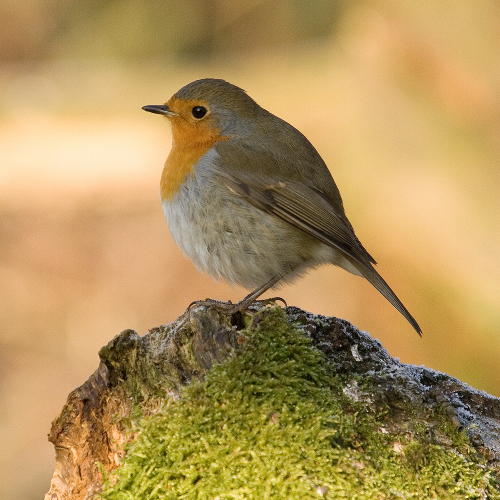 The Robin is well known to be Britain's most popular bird, beating off competition from the Barn Owl, Blackbird and Wren among others. Whether it's their bright red breast or curious nature, there is undoubtedly something special about this iconic species.

A common visitor to gardens across the UK, the Robin is a familiar sight to all of us. However, there might be a few things you don't know about the nation's favourite bird.

Not a thrush but a flycatcher

The Robin is a member of the chat family, which is comprised of a wide number of small, insect-eating birds found across the world. Traditionally, this group has been considered part of the wider thrush family, but more recently has been reclassified as part of the Old World flycatcher family.

With its red breast and curious expression, the Robin is widely regarded as one of the UK's most attractive birds. However, the cute appearance doesn't tell the whole story. Robins are actually fiercely territorial and will aggressively confront any intruders on their patch. It has been suggested the red breast may play a role in this behaviour, with the bright colour used as a threat display to intimidate rivals.

This territorial attitude sometimes brings Robins into conflict with other species and it's not uncommon for them to display aggression towards other small birds like sparrows and tits. Such behaviour is in stark contrast to the way in which Robins interact with humans. The birds often seem completely unafraid of people and will sometimes take food directly from the hand.

The Robin is not a nocturnal bird, but living in urban areas has changed this to some extent. In towns and cities, it is now common to hear the species singing during the evening, something which rarely occurs in rural habitats.

More than one theory has been put forwards to explain this change. Some people believe the artificial light in urban areas means Robins have started to sing in the evening. However, it has also been suggested the behaviour is due to the fact the noise created by traffic and humans is reduced later in the day, making it easier for the birds to communicate with each other.

The Robin is a prominent figure in folklore, with the most obvious example being its association with Christmas. This is believed to date back to the Victorian period and the fact the postmen of the period were nicknamed Robins due to their red uniforms. People would eagerly await the delivery of the postmen during the Christmas period and the Robin quickly became a symbol of the festive season.

Cultural depictions of the species date back further than this, however. In Norse mythology, the Robin was associated with the god Thor, while another myth claims the species developed its red breast after being touched by the blood of Jesus as he hung on the cross.

The Robin we know and love is scientifically known as the European Robin and can be found across the continent, extending as far east as western Siberia and south to northern Africa. Across the world, there is a huge variety of other Robin species, including the White-Starred Robin of southern Africa and the Magpie Robins of Asia and Africa. There is also the American Robin, a common bird in the US, which is actually a type of thrush. It shares the European Robin's red breast, but is more similar to a Blackbird in general proportions.