Creating a wildlife garden and Wild Flowers can be a great way of attracting beneficial bees, butterflies and insects into your garden and helping them to survive. Providing a Bug Box or Insect Hotel along side food and water will also encourage them to stay in your garden. 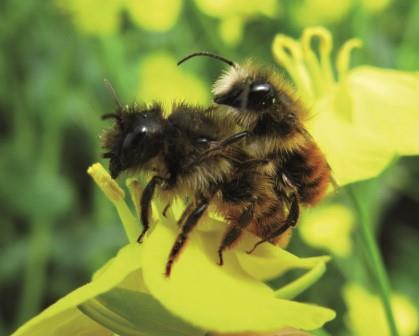 From the smallest springtail, perhaps living its entire life in one clump of moss, to large, dashing dragonflies or painted lady butterflies that migrate over hundreds of miles, insects underpin ecosystems. They pollinate plants, recycle waste materials and act as food for other creatures, including birds and mammals.

One of the best ways to encourage the more obvious species is to appeal to the pollinators: the bright, active bees, butterflies, moths and hoverflies, among others, that add so much life to a hot summer day. Providing a range of plants to supply nectar and pollen throughout the year will add some interest to the garden whatever the season, and the presence of these insects will in turn attract predators that further add to the biodiversity of the garden. As an added bonus, the larvae of many hoverfly species are predators of aphids.

By adding insect houses to your garden you provide a variety of microhabitats that can further increase the number and variety of species present and, in turn, the creatures that will prey or parasitise some of them. Ladybirds and lacewings, both voracious consumers of aphids, will use these products as hibernation sites while other species may simply use them as a day time refuge.

Solitary bees such as red mason bees will occupy specialist mason bee nests or insect houses with 8-10mm diameter nesting tunnels, and are harmless to children and pets. Mason bees have been shown to increase both the yield of fruit such as strawberries, cherries and apples and also, for reasons that aren’t yet understood, the shelf life of the crop.

An area of unmown grass, as large as you dare, is probably second only to a garden pond in terms of adding wildlife value, and can also act as a refuge for amphibians or help birds such as House Sparrows to fledge more chicks. One study found ten times more species and fifty times more individual creatures in an unmown area compared to a similar patch mown once a week. To avoid accusations of neglect or untidiness mow a neat edge to the grass plot or a sinuous path through it to show that the area is being managed.

A compost heap isn’t just a great way or recycling nutrients instead of buying in commercially produced composts, which may contain peat removed from some of Europe’s few remaining areas of bog land, but will also provide a home for an entire suite of invertebrate recyclers.

Some insects, including butterflies such as brimstone, small tortoiseshell, peacock and comma, will spend the winter as adults, emerging in the spring to renew the population, and depend on finding safe overwintering sites. Walls or tree stumps covered in ivy are a favoured choice for many species, including some butterflies and ladybirds, and once mature the ivy will also produce a valuable late source of pollen and nectar, and an equally important supply of berries that will last into late winter.

It’s also helpful to leave seed heads in place over the winter as miniature insect hotels, and to add some artificial habitat such as insect boxes to further increase the number and range of creatures that survive, ready to get the garden’s ecosystem moving when spring returns.

Adding a variety of insect houses will further increase the amount of shelter available for overwintering insects. The houses should be placed in a sheltered location away from prevailing winds and direct sunlight, ideally along an obvious feature such as a hedge or wall, and at least a metre above ground to avoid rain splatter during heavy showers. Once in position the nest box requires no further attention.

A garden rich in invertebrates, and with a range of habitats such as insect houses, unmown grass and compost heaps, will inevitably also be beneficial for other wildlife such as birds, mammals and amphibians. Invertebrates are an essential part of a thriving garden, so whatever your particular wildlife interest, encouraging the smallest life forms is likely to help.